Leave it up to the New York Post's Page Six to not leave well enough alone.

MAJOR League Baseball hates scandal, yet two on- air personalities on its new MLB Network were once caught up in controversy. Three years ago, former Seattle Mariner Harold Reynolds was canned from ESPN after alleged sexual harassment. Reynolds called the charge "a total misunderstanding . . . I gave a woman a hug, and I felt like it was misinterpreted," and he won a seven-figure, wrongful termination suit. Still, veteran radio sports producer Tom Somach told Page Six he was surprised by the hiring, asking, "What kind of message does that send?" And working as a guest analyst is Baltimore Oriole Billy Rip ken, whose 1989 baseball card showed him holding a bat with "[bleep] face" written on the knob. The card was yanked and re vised. MLB flack Matt Bourne called Reynolds "an exemplary employee in every way" and said Ripkin's card flap was "a very minor incident and what I would term as seemingly a prank." 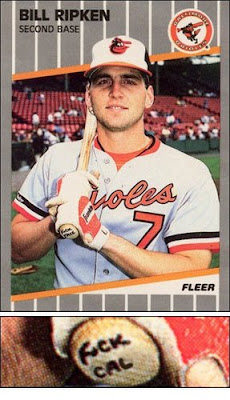 Email ThisBlogThis!Share to TwitterShare to FacebookShare to Pinterest
Posted by Hugging Harold Reynolds at 2/25/2009 09:47:00 AM

this is way more offensive than that stupid cartoon. I think we should all write letters to the Post demanding an apology to Harold. this matter is settled.