What's the Difference Between Soccer a Mom and a Pitbull? 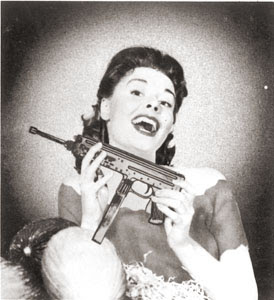 GUNS!
IS THIS NOT AMERICA? I THOUGHT THIS WAS AMERICA!
Soccer mom targeted for carrying gun to game

LEBANON- A southcentral Pennsylvania woman's concealed-weapons permit has been revoked after other parents complained about seeing her carrying her loaded handgun at her daughter's soccer game.

Hain told the Lebanon Daily News she's always openly carried a firearm without any problems in the past. She received the revocation notice and a warning from local soccer officials after the Sept. 11 game.

Soccer coach Charlie Jones says parents were upset by Hain carrying her gun at the game.

Sheriff Michael DeLeo says openly carrying a weapon to a youth soccer match shows a lack of judgment. DeLeo says he'll restore her permit if a court decides he was wrong.

Lebanon. 9/11.
Email ThisBlogThis!Share to TwitterShare to FacebookShare to Pinterest
Posted by Hugging Harold Reynolds at 9/24/2008 04:56:00 PM

As a soccer referee, seeing a parent on the sidelines with a gun would freak me out.

We Pennsylvanians sure do love our guns...although the handgun might've pushed the envelope a bit too far.