It really shouldn't come as a surprise to Eagles fans, or football fans in general for that matter. Philadelphia management has never had any qualms of letting go of faithful employees who've poured their hearts and souls into the city and team, citing their role as a business. And, while often heartless, that's their right and their prerogative.

However, a latest incident as reported by Philly Inquirer columnist John Gonzalez shows just how black the organization's heart really is. 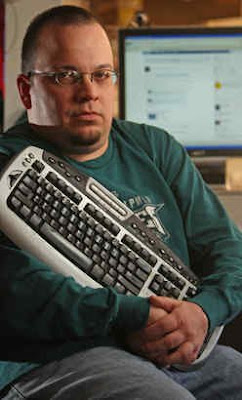 Photo: Michael Bryant
And like that. BANG. He's gone. To make matters worse, the six-year employee who missed only one game during his tenure suffers from something called transverse myelitis, and as such has a left leg significantly weaker than his right, and was often forced to haul around the stadium on duty in a wheelchair.

Say what you will about Dawkins being left to head West, he wound up with a very lucrative contract, whereas Leone didn't receive so much as a pat on the back.

Email ThisBlogThis!Share to TwitterShare to FacebookShare to Pinterest
Posted by Hugging Harold Reynolds at 3/09/2009 10:19:00 AM

the fact he has a disability shouldn't ever enter this conversation. he had disparaging things to say about his employer in a public forum and as a result was released... so goes life - bum leg or not.

The fact that he has a disability could enter the conversation if the Eagles are using his facebook indiscretion as a reason to fire an employee because of their special needs.

Anybody with any disability should know better than to ever use the R-word. Maybe the Eagles let him go because the R-word is so offensive to so many people, just the same as the N-word offends black people and the C-word offends women.
Either way, good for the Eagles.

Anyone that makes critical comments about the company they work for, or their manager on the Internet is asking for termination.

Lesson learned for this guy- there is no privacy on the internet, and companies use it too. Be careful what you say out there, or accept the consequences of your actions.